Welcome to the second of our Ampersand series: interviews with writers from all over the world who have a connection to Tuscany.

We are pleased to announce our second Ampersand Interview with bicultural author and performance artist Lee Foust. This summer Lee has been performing excerpts from his new book Poison and Antidote at various locations on the planet. And you’ll find one such excerpt, A Certainty, at the end of the interview. You can also listen to it here. 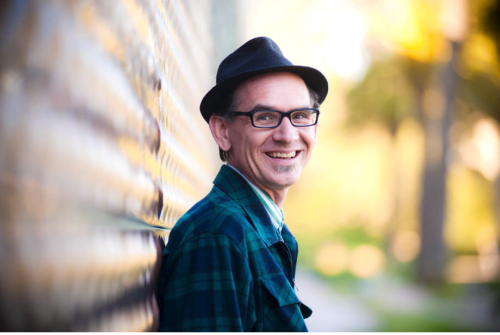 East Bay native Lee Foust relocated to San Francisco at the tender age of 20 to study creative writing at SFSU. Abandoning both SF and his studies, Lee traveled to Europe, a novel idea for him in 1986. There he fell in love with the city of Rome and the idea of Italy. Later, he studied in Florence and New York City, obtained a Ph.D., wed a well known rock critic, and co-edited Resister magazine. Washing again upon Tuscan shores, Lee remarried and became a father. Nowadays he rents in Florence with partner Debra A. Zeller, teaches, and recites his own works, with and without banging a drum, to anyone who’ll listen. Author of Sojourner, a collection of stories and poems about the mystery of place, and Poison and Antidote, 9 Bohemian tales of San Francisco from the Reagan era, Foust’s fiction, poetry, and essays have appeared in literary journals, magazines, and newspapers in The US, Canada, Australia, and Italy.

Such texts have changed for me as I myself have changed. I suppose the first texts to mirror my own brand of angst were not the tales so much as the introductions to Harlan Ellison’s various collections of his short stories. His angry young man rants framed my own growing social and political awareness. At university, Hemingway’s novels thrilled me as finely wrought works of prose just as I began to attempt such things myself. Samuel Beckett and Maurice Blanchot’s abstract and experimental fictions wormed their way into my own searching into the aesthetics of prose as I pretended to become an adult. Most recently Hubert Selby Jr.’s novels have awakened in me an awareness of the strength and power of human empathy. I’m a bit ashamed that I’ve not cited a woman’s voice here, but there have been many for me: Jane Bowles, Marguerite Duras, Virginia Wolf, and Chris Kraus.

What is the biggest personal obstacle you have to overcome in order to write?

Antsyness. Often it’s hard to sit still in the chair and, along the same lines, I’m always trying to say everything that there is to say in one long sentence. What’s the rush? I wonder.

I used to think it was “What is time?” Now I think it might be more like—paraphrasing Cole Porter, “What are these things called words?”

Tell us something that few people know about you.

This is your most difficult question because I am rather a blabbermouth so there’s little about myself that I haven’t already shouted from the rooftops in one way or another. Oh, I know: In the early 1990s, in New York City, some recent female college grads in a bar told me that if you stop using soap to wash your hair the oiliness self-regulates. I haven’t shampooed my hair since then and, you know, it seems to be true.

You run the very successful Tasso Open Mic Night with fellow writers in Florence. How do you see this evolving and what are your hopes for it?

One of the things that I find deadly in terms of creating art—and therefore in life in general since I see art as life’s best paradigm—is framing things in terms of expectations. More than having a plan or vision, I’m excited to participate in the Open Mic’s evolution, whatever that might be. What’s been most exciting about it so far is to encounter total strangers and to feel the evenings form themselves out of the various voices and personalities that show up and create something unique each time. I’d like to keep it open in every sense of the word. If anything, I’d like there to be more of the unexpected in the future.

How does being a spoken word artist influence your writing? What role does your bi-cultural life (Florence and San Francisco) play in this?

This question makes me feel a bit ashamed actually that my texts for performance and my more extended texts (novels) don’t bleed into each other more. I can’t really say that I feel like either my performances or my expat life directly affect my writing. They must, of course, but I just don’t look at it that way. I feel more like it’s the other way around: I perform because I write performance pieces, and I move between two cities because life has taken me there and since writing has lately become my primary endeavor, the writing accompanies me in these movements. There is a wonderful writing and performance community in the Bay Area (where I spend my summers) and I certainly have brought some of that model back to Florence with me, and I have worked to foster the same kind of community here. Of course my day-to-day life in Florence and my day job as a teacher of Italian literature has prompted me to compose many texts with an Italian and expat flavor to them. Frankly, I’d like to see the spoken word leak more into all of my writing. I feel that I’m a bit of a failure in this respect as my works seem to rather fall into two separate forms—those for reading and those for performance, even if I can perform the former and can read the latter—and I wish that the lines were rather more blurred between them. I have made some gestures in that direction: for instance I’m working on an audiobook version of my recently published collection of short stories about Bohemian San Francisco of the 1980’s, Poison and Antidote, and it’s becoming something of a multimedia undertaking, with guest voices, music, and sound effects. I really enjoy experiments along those lines.

How many Surrealists does it take to screw in a light bulb? —Fish!

If you could shout something from a mountaintop, what would it be?

Get me down from here!

A CERTAINTY by Lee Foust.

I’ve spared you none of the telling details, I hope. A writer, I love the feel of my pen rolling across the paper, making out words with the certainty of black ink. Words are so comforting in the instant you read them, so necessary once they’ve been written. Later I’ll probably get up and walk somewhere: across town, to the park, through the Sunday streets of another country. After all this, it’s still only the story of getting out of one’s parents’ house, of yanking the triangle into a line, of remembering without repeating, of trying to get to the moral of the story. Maybe tomorrow I’ll find something else to work on, although I have no words yet for the images, no thoughts for the characters, no feelings for the furniture. I’ll be absolved by getting out of the apartment—especially the kitchen. This is the last image—I’m holding it close—and it’s of a woman. I’ll be forced to open my eyes now; but I’ll also have the certainty of the image to keep, another message to myself. Remembering it as something that’s already happened but which I’d forgotten; remembering it suddenly, involuntarily, like a déjà vu: She’s in a train car looking out the window—no, the window is open, gone, slid away behind the other pane, like in a Greyhound or a school bus. The wind, coming in through the open space, blows across our faces. Her eyes may be closed, as mine are now; she’s only concentrating on feeling the wind on her face more closely. We don’t have to be touching, but we aren’t afraid to open the windows. Maybe the rushing air has made one of my eyes tear, because I feel it now rolling down the side of my face. Suddenly aware of the tickle, I realize that I must be awake. But my eyes are still closed. Only now they are becoming, the lids separating, bravely, no choice now, unavoidably, open to another day.