We are pleased to announce our sixth Ampersand Interview with British author Baret Magarian. Margarian’s novel The Fabrications was published this summer by Pleasure Boat Studio.

“The Fabrications shows how the invented and the real have today been dizzyingly and dangerously fused to the point in which “there is no reality anymore. Reality is what you choose to make up” as Ryan Rees, the publicist at the center of the book, declares. Oscar Babel’s unremarkable life is transfigured when his friend Bloch’s fictional story about him comes true, but when he falls under the sway of an all-powerful publicist who hurtles him into the limelight, Oscar loses his soul”– Baret Magarian.

Look for an excerpt from the novel in our next journal issue, Autumn 2017. On the following pages, we hope you’ll enjoy this peek into Baret Magarian’s writing process and more. 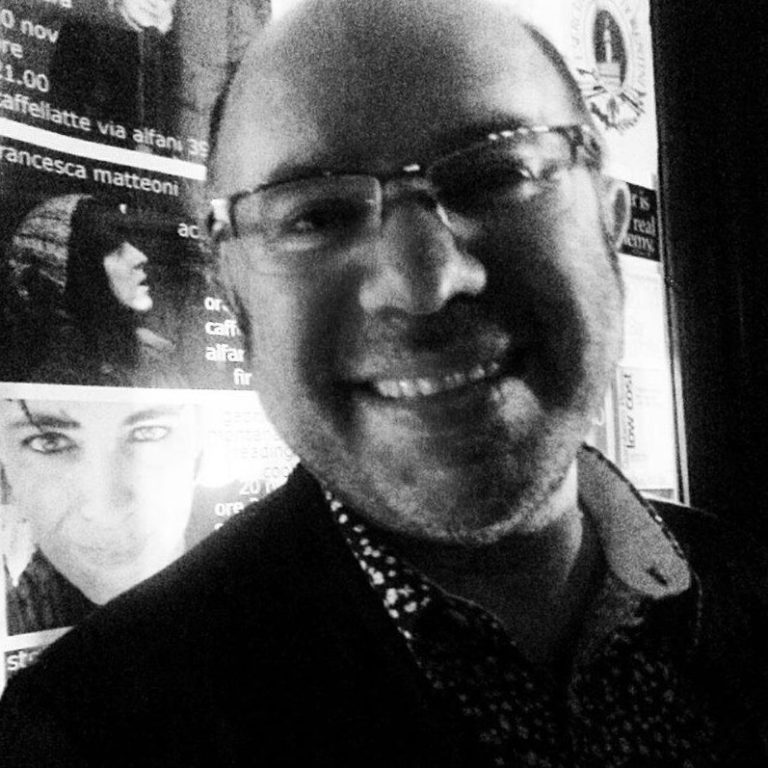 His monologue “The Pain Tapestry” will be staged in the autumn of this year at Torino’s Espace, with the noted Italian-American actor Roberto Zibetti in a piece of total theatre that utilises live music, paintings and film. Baret is also a composer of piano music in the vein of Alkan and Jarrett, available for free listening at Soundcloud – Floto Music. His collection of short stories Melting Point has just been published in Italian translation by Quarup. Jonathan Coe, in his introduction, compares the stories to the work of several key Modernist writers.

What book comes closest to capturing something about you? What is this aspect?

It’s probably Steppenwolf, which is a great great book in my view. The book is an amazing dissection of the need for solitude and the consoling and contaminating qualities of it. I don’t like to admit it but I am a very solitary person I think – I love people but can only be sociable for small bursts of time – after which I need to retreat into tenebrous realms. Harry Haller, the hero of the novel, is a hypersensitive and he spends his time roaming and searching for something – some kind of artistic or spiritual perfection that always eludes him. I am like Harry, a desperate romantic, and romantics, more than other kind of people, are prone to resolving eventually into cynics; indeed you might say that romantics and cynics are really two sides of the same coin.

Chronic laziness – I am by nature exceptionally lazy and would much rather do anything else than write. I am also a master of procrastination, so it’s a lethal combination. It’s also something to do with the fact that I can’t abide writing what I consider to be fluff or filler material – and so I have this great allergic reaction to my own writing when it is mediocre – to avoid the considerable pain of this I simply derail the issue altogether by not writing anything at all.

What is something few people know about you.

Interesting question. Maybe the fact that I can speak Armenian – it’s never really in evidence because I never really have the opportunity to speak it!

At an NYU panel discussion on literary arts in Florence (spring 2017), you described that moment when an idea comes—an exciting idea, worthy of pursuit—and you want to capture it before it drifts off, but without squashing it. First, what are the particular signs that you’ve encountered a worthy idea? And, second, how do you develop these ideas while also letting them breathe and take the shape they “need” to take; that is, how do you allow them to be yours and not yours at the same time? Can you tell our readers a little bit about this process?

I think when you have encountered a worthy idea you sort of feel it physically – it’s like a little contraction in your stomach or in your heart. You just sort of know. It’s got something. And there is a light-headedness about the experience – it feels rather exciting, but in a delicate way. But those moments are always, I find, hovering around the threshold of forgetfulness and oblivion. I think it’s because they emerge from a very delicate area of the brain – one that is defined by a sense of the nebulous – they emerge very delicately and they can dissolve very easily as a result – so you have to be very attentive and careful and to capture them with a jotted down word or two – ideas are very very close to the condition of silence. You develop the idea by listening to it, by not imposing your own agenda, and you let the idea show you its way. Sometimes that can happen quickly and painlessly, sometimes it takes time. But the process should remain organic and soft and unforced. Walks, books, reading, physical movement, open spaces, changes in perspective, observation of people, music: all of these things can help. It’s like a courtship. The idea has its origins in you but if the idea is any good it terminates at a place far far away from the subjectivities of self.

I am not sure about that. I write about many different things and in many different registers. I like to stretch writing and to stretch genres and contexts and stories. I am always trying to cram in as much as possible, to find a way of making a sentence malleable and dexterous, so that it’s working beyond the capacities of a normal sentence. But I would say that this “busyness” probably has its roots in the way in which I view the world – which is essentially in a rather intense way. I am constantly overwhelmed by the sheer force of sensory perception and by the details, clamour, richness and terrors of this world. So my writing is probably a product of this dense way of filtering and processing reality. In addition I have always been fixated on the notion of identity and what makes a self or an “I.” I want to uncover the self beyond the self, the I beyond the I. I am always watchful for the existence of a shadow self – and that is the dominant theme of my Venetian novella Mirror and Silhouette.

You have a novel out this summer, The Fabrications. How did living in Florence influence this project?

Well I have to say that Florence played a fairly peripheral role in regard to the novel. The novel was conceived of and written principally in London. I did carry out significant stylistic revisions while I was living in Florence but the town itself does not really feature in the narrative – Florence and Italy are much more in evidence in the novella that I referred to above.

It’s very hard, but in my case it’s a question of slowing down, cutting out all the noise, and reflecting, thinking, being. One should always carry a notepad because you never know when an idea will come. However I tend to think that there is a strong correlation between creativity and being at peace. In order to attain that peace one has to try and nurture stillness and pure thought. The mind has to be free to think, reflect, find connections, and to roam and play. It’s a question of being alone and of being still. Observation of others, of nature, of natural phenomena can help to induce an almost trance-like state. I think that state is conducive to the pursuit of ideas.

If you could shout something from a mountain top, what would it be?

If you’d like to read the original pdf of this interview or read previous interviews, please go to the Ampersand page.