We’re delighted to interview Wallis Wilde-Menozzi in our eleventh installment of Ampersand. This talented, inquisitive, Parma-based writer shines a light on facets of her life and work in thoughtful answers that will stay with you and reverberate, just like some of the characters she creates. Wilde-Menozzi’s writing takes many forms and we’re thrilled that her unpublished work of creative nonfiction, “Fragile States,” is forthcoming in our December issue of The Sigh Press. 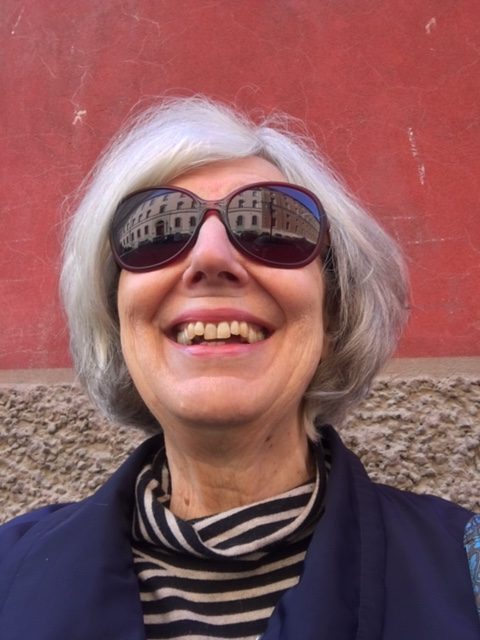 Wallis Wilde-Menozzi is writing her third book with Farrar, Straus and Giroux, NYC. They will reissue her first, Mother Tongue, An American Life in Italy, in 2020. Her teaching, which extends from Columbia University to the Camillianum Institute in Rome, continues to share the power of narrative and the ethics of using it to change lives. An American, she has lived in Parma, Italy, for nearly forty years. Her poetry and essays have appeared in journals from Granta to Best Spiritual Essays. A recent review called her work “an underground secret among the conoscenti.” She believes conditions in the world of today call writers to use their courage and imaginations.

It is difficult to choose one book that captures something about me, while not seeming to puff up my capacities. Duino Elegies by Maria Rainer Rilke, Wild Iris by Louise Gluck are two powerful books of poetry that make words spiritual vessels. Writing is labor, but I believe the best is also a received gift.

I live in Italy. Italian is my daily language. But I write in English. My writing voice is literally in my head. In recent years, I have taught narrative to Nigerians, who are in Parma, waiting for their papers. I have taught doctors, nurses, priests and nuns from developing countries in a Master’s program in Rome. I am an instructor in a Writers Group in Geneva with members from thirty countries. These exchanges give me tremendous energy and a sense of a world in evolution. They reinforce my point of view, which comes from these times: connectedness on the one hand and fracture on the other.

In the notes for your novel, Toscanelli’s Ray (Cadmus Editions, 2013), you mention two catalysts for the book: a “bobbing circle of light”—thanks to the ingenious 15th century technology of Paolo Toscanelli—at a 1997 solstice ceremony in Florence’s Duomo and your discovery of an immigrant African woman with her daughter under a bridge in Florence. Interestingly, in the book, it is in fact light (and heat)— “the sun and the ray”—that serves to unify the myriad characters from vastly different circumstances and socioeconomic rungs.Can you share with us how you researched and developed characters like Milli, Irene, and Farina?

They were always inside of me. Probably a Jungian thinker would say they were each part of my wholeness. Instead, I became acutely aware, once I began writing the novel, that, in strange ways, each of the many characters actually crossed my path in real life. I mean literally I met a nun and the sparks went off in my mind that she would run a convent. While I stood at a traffic light in Parma, a Nigerian prostitute began to speak to me. We continued the conversation. The librarian in the archives in Florence shared her memories of the flood of ‘66. I was on a field trip in a forest in Berlin when I heard about a child called Farina. In New York, at a foundation, I met a man who became Milli’s father, Aki. Virgil, the toad, was my pet when I was a girl of nine.

I have a dear friend, a roommate in university, who has lived in Florence since then. After years and years of prowling the city with her, I knew it well. The challenge of the book’s narration was to keep each story equal and running. I wanted a polyphonic form where all voices have parts and no single plot takes over. Crime and Punishment by Dostoevsky is a forerunner of that. I wanted to find a new way to have readers feel human beings as equal.

A line from your 2013 memoir, The Other Side of the Tiber; Reflections on Time in Italy (Farrar, Straus and Giroux): “We count on the Italian reservoir of responses and solutions as we search for our own private sense of the whole.” This insightful observation very likely speaks to an entire swath of expats in Italy, but there are many kinds of “expats” in Italy today. Do you see or foresee any particularly Italian “responses and solutions” to current immigration in Italy? Does it mean anything that a cultural treasure such as Toscanelli’s gnomon has no significance for someone like Milli?

In Italy, as elsewhere, there is much work to be done with people who have arrived illegally but are still being held, without papers, without futures. As writers and journalists we must be active in narrating paths for their integration.

In Toscanelli’s Ray, Milli, a prostitute from Nigeria, remembers the early Benin terracotta statues of Kings and Queens that are virtually unknown in the West. She also remembers a religious tribal ceremony that her mother carries out in addition to following her Christian faith. Judgement about cultural treasure is often associated with a point of view—an us, an ours, a them and theirs. The gnomon is unknown perhaps to Milli (and I would dare say many Italians and Americans) and the Benin terracotta statues, made in the thirteenth and fourteenth century are as advanced as any sculptures made in Italy a century later. Culture is a temporal, historical, political concept. The unknown, it seems to me, is a permanent reality as well as a culturally determined state of mind.

As a poet, who has succumbed to the floods of words in prose, I still look for the economy and originality of poetry. Good writing should create reality that was not felt or seen until an author gets it down. My question is always: What needs saying; what words still need to be written?

Once we realize that we are hounds on the trail of discovery, no one, no barrier, can stop us from dedicating ourselves to it. But we might make the activity too grand. We might want to imagine ourselves as very great. Instead, if we accept imperfection, no idea is ephemeral. If making art is the only way existence makes sense—with a job, without a job, with sleep, without sleep, in pain, not in pain, with kids, with meals, with or without recognition—we will become endlessly resourceful in finding ways not to give up. Yet there may be years when nothing works. Nothing gets written. Remorse takes over, until one spring day or maybe one winter frost, the body starts to hum. It feels the shake and the vague scent. Something has changed; it’s time to go.

I have no idea. In a long life, so much has been shared and the answer to your question would need qualification: which few people, in which place, in which decade? In general, I fear the way private and public has blurred in the age of Facebook. So what remains a little known fact about me will just have to remain that way for whomever those few people might be.

Don’t get lost with ideas like success. Get lost in the wilds of imagination and discover new worlds.

Good for you for asking about humor. We need it. Often writers who wish to be taken seriously forget the magic of humor. I’ll cite Pablo Neruda here. The one regret he had at the end of his life was that he had not eaten enough ice cream.