“I have told creative writing students that good writing exists in the space between what we should feel and how we really feel.” We’re looking forward to writing from Colleen in the next issue of The Sigh Press (Autumn 2018) and we hope you’ll enjoy our interview with Colleen on these pages. 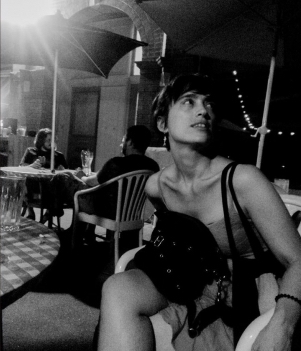 Colleen McKee is the author of five collections of poetry, fiction, and memoir: My Hot Little Tomato (Cherry Pie Press); Are We Feeling Better Yet? Women Speak About Health Care in America (PenUltimate Press); A Partial List of Things I Have Done for Money (JKP); Nine Kinds of Wrong (JKP); and The Kingdom of Roly-Polys (Pedestrian Press). The Kingdom of Roly-Polys is available at Paperback Exchange in Florence, Italy, and at the Beat Museum in San Francisco, California.

I am reading The Manor by Isaac Bashevis Singer now. I have been reading a lot of his work lately, not only because I’m entranced by his stories but because I am writing a novel set in 1920s Eastern Europe, a place he loved and had to flee. In his novels, faith is often a thorn in one’s side. It’s painful, and it’s at least as painful to remove. Actually, even his characters who lose faith in G-d’s inherent goodness and the meritocracy of the cosmos are still unable to pluck the thorn of faith completely. It’s like a bee that leaves half its sting inside; you grow around it. I spent a lot of time at synagogue as a child (though not as a Hasid, like Bashevis Singer). I am still religious but find it difficult to believe that the good are rewarded and the bad, punished. This sets me apart from both my atheist and religious friends. But I believe in G-d and the realm of the spirits like I believe my hand is attached to my arm.

I’m not sure if there is one question I pursue in all of my writing, but here is something I think about every day: Vincent van Gogh wrote: “[W]e must not judge of G-d from this world, it’s just a study that didn’t come off. What can you do with a study that has gone wrong? If you are fond of the artist, you do not find much to criticize…but you have the right to ask for something better…It is only a master who can make such a blunder, and perhaps this is the best consolation we can have of it.” What does it mean to live in a broken world created by an imperfect G-d? How does one live surrounded by fascinating people riddled with design flaws? How do I survive myself with all my ambitions and despair? I don’t know the answers to these questions, but I know that paying close attention to this glitchy world is necessary not only for physical and spiritual survival but also for writing that is vivid and relatable.

You once wrote, “I remember everything I should and I remember other things as well.” It’s intriguing to think about the “should” here. What “should” you remember and what another “should” remember might be very different, according to the unique lens through which we each see and experience. Can you talk a little about the characteristics of your lens?

This quote comes toward the beginning of my poem “From the Shangri-La Trailer Court, with Love.” I was probably hinting at the kind of childhood my parents would like me to remember; they would prefer I forget the trauma of poverty and an abusive stepfather. Kids see seedy things, disturbing things—childhood innocence is probably over long before most parents would like to acknowledge that. I have told creative writing students that good writing exists in the space between what we should feel and how we really feel. Maybe this is especially true of writing about childhood and the family.

Joint pain in my hands. I have been doing physical therapy and using a special pen. I have been getting used to a new rhythm of writing and rest. It is frustrating sometimes when my head is bustling with ideas but my hands need a break. They are getting stronger though. If you are a writer with hand pain, get it checked out!

I have been living in cities since I was sixteen but still feel like a hick. I grew up in the middle of the woods, Missouri. My hometown can’t be accurately described as a town; the only businesses were a Stop N Go (where my aunt worked, which made her glamorous to me), and a post office which usually refused to deliver mail due to the crumbling hilly roads and frequent floods. I still think getting mail delivered to my apartment is a treat.

It sounds like you’ve earned the title Poet Laureate of BART (Bay Area Rapid Transit), a title you jokingly came up with because of how much writing you do while on public transit. What are some of the first memorable details that come to mind from recent BART commutes? In the spirit of those daily observations, what is still vivid from your time in public spaces in Florence?

The best thing about BART is the Bay Area Street Dancers. They break dance, do flips, splits and contortions in the narrow aisles of moving cars.

When I see these idealistic young people cheerfully dislocating their shoulders from their sockets, mostly for an audience of ingrates who won’t even glance up from their phones, I feel hope for the future. I admire the dancers’ dedication and am glad I moved to a city with a significant population of fabulous freaks.

I remember becoming terribly lost on my second day [in Florence], walking around and around the Fortezza with its astonishing (illicit?) mural of chained lilies. I was bewildered by maps and construction detours, trying to meet my friend and host, the writer Lee Foust, on the steps of the Old Sacristy. With the help of non-English-speaking but determined natives, I navigated the dark downtown maze of massive architectural marvels and finally found Lee on those steps. He was giddily writing in his legal pad, delighted at a trio of handsome Italians playing old standards like “Fly Me to the Moon.” The singer played a mop with a long string like a bass. It was strange to think of somber Michelangelo statues locked up a few yards away as we drank apricot nectar and soaked up the sun. (Maybe I should move to Florence and busk in plazas—I’m a pretty good singer and know most of the words to Sinatra’s songs.)

A writers’ group helps keep me productive. There’s a healthy competition there—not wanting to be emptyhanded while your friends bring all these glittering stories.

I don’t think of myself as pursuing ideas. I start a story or poem because there is something in the character or story that amuses or fascinates me. It is only after working on something for quite a while that I will get a sense of what some underlying ideas may be. For example, when I began my novel The Strong Man and the Beasts, I thought it was just a funny story about a circus strong man whose body parts start turning into animals. But I realized that among other things, it was also about what it means to have a disability and how that can separate one from one’s community and even oneself.

I would give this advice to my 25-year-old self as well as to any writer:

An example: Once I attended a micro-fiction reading at a brewery. All the readers had had their fiction published in a prestigious literary magazine (which I had tried four times to break into, with no luck). Some of the performers had won prizes, up to $1000, for their micro-fiction. I was looking forward to hearing my friends and others read; I wasn’t feeling particularly envious that night, especially since I had not submitted to the contest. There was an additional, surprise contest that night: one could, in the space of about 5 minutes, write a 25-word micro-micro-fiction story on a tiny slip of paper for the chance to win a 1st prize of either a 6-pack of beer or a 2nd prize of a jar of okra pickles. As I have always loved pickles, I wrote a mini-story about a woman whose goal in life is to try every kind of pickles there are (okay, it was barely fiction).

I won first prize, the six-pack. About five writers said loudly enough for me to hear that this was unfair: “She’s a poet, not a fiction writer!” (I had actually already published a little fiction.) Some of the loudest, most disgusted writers had just been published in this prestigious magazine and had even won $1000 prizes, which is more than I have ever earned with a single piece of writing, even with a book. And I didn’t even get the pickles I craved!

So be honest with yourself when you feel envy, and be careful how you express that envy. I try to think of envy not as a shameful emotion but as a wake-up call to what one truly wants and might pursue. I try to use that feeling as a motivator to write more and submit more.

Also, try to find a balance when you do find some success—on the one hand, you do want to let other people know about your accomplishments so that they can read your work or come to your show, but on the other hand, avoid gloating. Remember to still ask about your friends’ writing. When possible, try to be helpful to writers in your community who aren’t having luck with whatever it is they need—a publishing contact, a writers’ group, a little feedback on a manuscript.

Hopefully they will remember you when you need something, as few writers are blazingly successful from the start to finish of their careers.

My friend Randy Underdog told me this one:
A man goes to answer his doorbell. He looks up and down the block but sees no one there. Finally he sees it—a snail stuck to his doorbell. “Yuck!” the man yells. “A slimy snail!” He pries the sticky snail away and hurls him/her as far as he can. (Fun fact: snails are hermaphrodites.)

A year later, the doorbell rings again. The man’s confused. No one’s there. Oh! It’s the snail—who looks up at him and says, “Hey! What was that all about?”

(Maybe that’s what should be on my tombstone: Hey! What was that all about?)